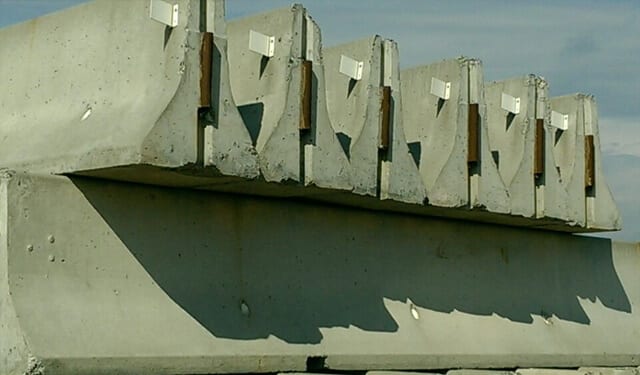 The omnipresent wedges of concrete lining the medians and shoulders of highways in every state are universally referred to as ‘Jersey Barriers’. These concrete barriers are commonly used in many narrow highway medians, to prevent vehicle crossovers into oncoming traffic. During 1940s and 1960s, many states tried to make their own concrete barriers but failed to establish a standard type.

In fact, these barriers made their first appearance on a treacherous stretch of California mountain highway in 1946. These barriers are used to minimize the need for maintenance on a very narrow median and to help trucks stay out of oncoming traffic. In 1949, Jersey first introduced their barriers which were 18 inches tall and looked like a short wall with curbs on both sides. These barriers made in Jersey met with some success reducing head-on collisions and the injuries on highways fell by 75%. It is also reported that these concrete barriers reduced the overall accident rate and fatal highway accidents by 20%

The 32-inch-high concrete Jersey barrier soon became the standard concrete barrier design for decades and is still widely used today. The basic reason why people choose Jersey barriers is that the New Jersey profile redirects a vehicle that hits it. This makes the vehicle’s wheels and sheet metal on the impacting side ride upward to prevent vehicle rollover. The ability of these barriers to absorb proportional impacts and the ease of taking up desired designs and shapes, they are commonly accepted by the public. Hence, they are named Jersey barriers and are still acceptable, because they adequately pass crash tests administered by the National Highway Traffic Safety Administration.

How Far in Advance Do I Need to Order?

The Science behind Concrete Barrier Shapes for Safety